Conflict in a Buddhist Society

Conflict in a Buddhist Society: Tibet under the Dalai Lamas

Conflict in a Buddhist Societypresents a new way of looking at Tibet under the rule of the Dalai Lamas (1642–1959). Although this era can be clearly delineated as a distinct period in the history of Tibet, many questions remain concerning the specific form of rule established. Author Peter Schwieger attempts to make transparent the complexity and dynamics of the Dalai Lamas’ domination using the work of sociologist Niklas Luhman (1927–1998) as his theoretical starting point. Luhman’s systems theory allows Schwieger to approach Tibetan history and culture as a remarkable effort to create — under times of great conflict and stress and using uncommon means — a stable social and political order.
Schwieger begins by asking the crucial question of how Tibet’s society dealt with conflict. The chapters that follow answer this question from various perspectives: history and memory; domination; hierarchy; center and periphery; semantics; morality and ethics; ritual; law; and war. Each reveals a different avenue for cross-cutting discourses in the historical and social sciences. Together, they provide a comprehensive picture of how conflicts were portrayed in Tibet society and how the manner in which they were handled stabilized the country for a considerable time but were ultimately unsuccessful in the face of radical upheavals in its environment.

Situated at the intersection of systems theory, conflict theory, and Tibetan / Inner Asian history and society, Conflict in a Buddhist Societywill be of considerable interest to students and scholars in these areas. Its theoretical rather than narrative-descriptive approach to the history of the three centuries of Dalai Lama rule will be welcomed as wide-ranging and insightful. 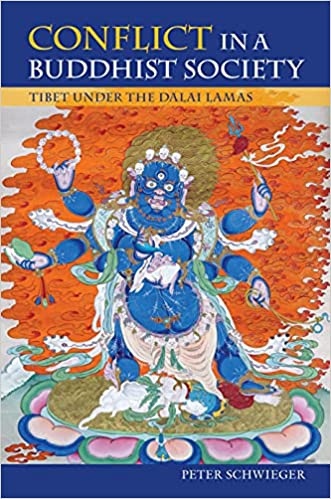 Conflict in a Buddhist Society.pdf
6.56 MB