The Shogun’s Last Samurai Corps: The Bloody Battles and Intrigues of the Shinsengumi

The Shogun’s Last Samurai Corps tells the thrilling story of the Shinsengumi—the legendary corps of Samurai warriors tasked with keeping order in Kyoto during the final chaotic years of the Tokugawa Shogunate (1600–1868).

This book recounts the fascinating tales of political intrigue, murder and mayhem surrounding the fearsome Shinsengumi, including:

• The infamous slaughter at Ikidaya Inn where, after learning of a plan to torch the city, a group of Shinsengumi viciously attacked and killed a group of anti-Tokugawa plotters
• The bloody assassination of Serizawa Kamo, the Shinsengumi leader, under highly suspicious circumstances
• The final tumultuous battles of the civil war in which the Shinsengumi fought and died in a series of doomed last stands

Author and Samurai history expert Romulus Hillsborough uses letters, memoirs, interviews and eyewitness accounts to paint a vivid picture of the Shinsengumi, their origins, violent methods and the colorful characters that led the group. 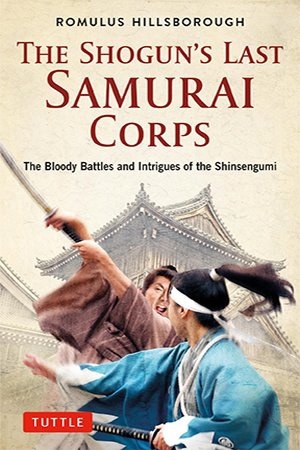