A Global History of War. From Assyria to the 21st Century

While many books examine specific wars, few study the history of war worldwide and from an evolutionary perspective. A Global History of War is one of the first works to focus not on the impact of war on civilizations, but rather on how civilizations impact the art and execution of war. World-renowned scholar Gérard Chaliand concentrates on the peoples and cultures who have determined how war is conducted and reveals the lasting historical consequences of combat, offering a unique picture of the major geopolitical and civilizational clashes that have rocked our common history and made us who we are today. Chaliand’s questions provoke a new understanding of the development of armed conflict. How did the foremost non-European empires rise and fall? What critical role did the nomads of the Eurasian steppes and their descendants play? Chaliand illuminates the military cultures and martial traditions of the great Eurasian empires, including Turkey, China, Iran, and Mongolia. Based on fifteen years of research, this book provides a novel military and strategic perspective on the crises and conflicts that have shaped the current world order.

2) The History of Terrorism: From Antiquity to ISIS – Gérard Chaliand
University of California Press | 2016 | EPUB

This authoritative work provides an essential perspective on terrorism by offering a rare opportunity for analysis and reflection at a time of ongoing violence, threats, and reprisals. Some of the best international specialists on the subject examine terrorism’s complex history from antiquity to the present day and find that terror, long the weapon of the weak against the strong, is a tactic as old as warfare itself. Beginning with the Zealots of the first century CE, contributors go on to discuss the Assassins of the Middle Ages, the 1789 Terror movement in Europe, Bolshevik terrorism during the Russian Revolution, Stalinism, “resistance” terrorism during World War II, and Latin American revolutionary movements of the late 1960s. Finally, they consider the emergence of modern transnational terrorism, focusing on the roots of Islamic terrorism, al Qaeda, and the contemporary suicide martyr. Along the way, they provide a groundbreaking analysis of how terrorism has been perceived throughout history. What becomes powerfully clear is that only through deeper understanding can we fully grasp the present dangers of a phenomenon whose repercussions are far from over. This updated edition includes a new chapter analyzing the rise of ISIS and key events such as the 2015 Paris attacks.

3) War and Religion: Europe and the Mediterranean from the First through the Twenty-first Centuries – Arnaud Blin
University of California Press | 2019 | EPUB

The resurgence of violent terrorist organizations claiming to act in the name of God has rekindled dramatic public debate about the connection between violence and religion and its history.

Offering a panoramic view of the tangled history of war and religion throughout Europe and the Mediterranean, War and Religion takes a hard look at the tumultuous history of war in its relationship to religion. Arnaud Blin examines how this relationship began through the concurrent emergence of the Mediterranean empires and the great monotheistic faiths. Moving through the Middle Ages and the Renaissance and into the modern era, Blin concludes with why the link between violence and religion endures. For each time period, Blin shows how religion not only fueled a great number of conflicts but also defined the manner in which wars were conducted and fought. 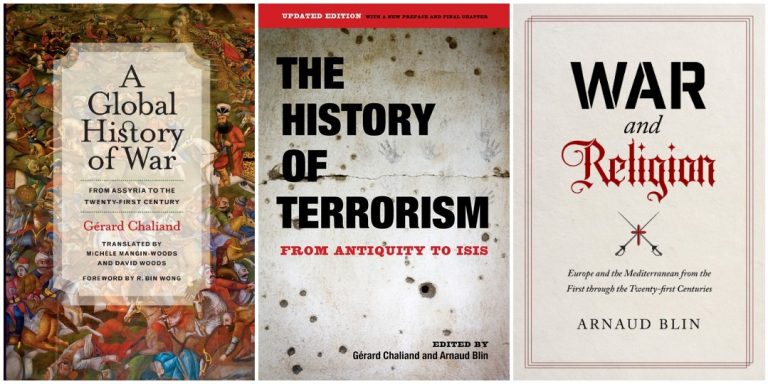