Money and Government: The Past and Future of Economics

Money and Government: The Past and Future of Economics

A critical examination of economics’s past and future, and how it needs to change, by one of the most eminent political economists of our time

The dominant view in economics is that money and government should play only a minor role in economic life. Economic outcomes, it is claimed, are best left to the “invisible hand” of the market. Yet these claims remain staunchly unsettled. The view taken in this important new book is that the omnipresence of uncertainty makes money and government essential features of any market economy.

Since Adam Smith, classical economics has espoused nonintervention in markets. The Great Depression brought Keynesian economics to the fore, but stagflation in the 1970s brought a return to small-state orthodoxy. The 2008 global financial crash should have brought a reevaluation of that stance; instead the response has been punishing austerity and anemic recovery. This book aims to reintroduce Keynes’s central insights to a new generation of economists, and embolden them to return money and government to the starring roles in the economic drama that they deserve.

Winner of the Bronze medal in the 2019 Axiom Awards, Economics category

“Skidelsky writes with sparkle and opinion, in aid of explaining what he regards as the disaster of 2008 and its aftermath.”—Deirdre Nansen McCloskey, Wall Street Journal
“Since the mid-1990s we have been, once again, living in a world in which Keynes is the most relevant economist to understanding our situation. Robert Skidelsky knows John Maynard Keynes better than Keynes knew himself. Thus this is likely to be the most valuable economics book you read this year.”—Brad DeLong, University of California, Berkeley

“A fascinating assessment by one of the world’s leading experts on the history of money and government. The integration with the author’s unrivaled expertise on Keynes is particularly valuable. Essential reading for anyone who would like to understand economics—or make better and more stable policy.”—Simon Johnson, MIT Sloan, co-author of 13 Bankers and White House Burning

“Money and Government is a powerful and well-written book that combines deep historical understanding with a rigorous approach to economics in an utterly persuasive way.”—Harold James, Princeton University

Robert Skidelsky is emeritus professor of political economy at the University of Warwick. He is the author of many books, most notably a three-volume biography of John Maynard Keynes. 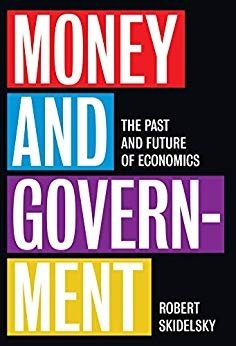 Money and Government The Past and Future of Economics.epub
4.69 MB
More magazines
on the
MAGAZINELIB.COM