Where War Began: A Military History of the Middle East from the Birth of Civilization to Alexander the Great and the Romans

Bloody fighting between rival tribes and clans has existed since the dawn of Homo sapiens, but war as we knew it began to take the more organized forms we recognize today in the ancient Near East, starting in the vital region near the Tigris and Euphrates Rivers (modern Iraq) and ultimately extending west to the Mediterranean Sea through what became the Holy Land of the Bible, a region eventually contested by Egypt, the Roman Empire, and others, and extending north and east into the mountains of Persia (modern Iran). In this informed and accessible history, Arthur Cotterell tells the story of how the story of the development of civilization is also the story of the development of organized warfare

This story begins around 4,000 to 3,000 BC with the Sumerians, one of the first dominant civilizations of fertile Mesopotamia, and their wars with their neighbors. The Sumerians eventually gave way to the Babylonians, whose period of dominance saw rudimentary “great power” rivalries begin to form with the likes of Egypt and the Hittites and the Battle of Kadesh (1274 BC). This period resolved with the fall of Babylon and the rise of other powers, ultimately the Persian Empire of Cyrus and Darius, one of the great ancient dynasties, which battled the Greeks directly (as chronicled in Herodotus) and indirectly as rival Persian factions battled each other (e.g., as chronicled in Xenophon’s account of the storied Ten Thousand).

In the period that followed, the Near East was dominated by Alexander the Great, whose legendary campaigns conquered Persia and ventured east into modern India. This era saw the refinement of the Greek hoplite tactics that remained standard for many hundreds of years. After Alexander the Great, and the rise of the Seleucids and Parthians where Persians once reigned, the Roman Empire began to exert its power in the region, especially at its colonies in Judea and Syria.

Spanning some 4,000 years and drawing anecdotes and quotations from ancient sources, Where War Began is a lively narrative of the origins of war in a region that is still afflicted by war and that still shapes global politics. 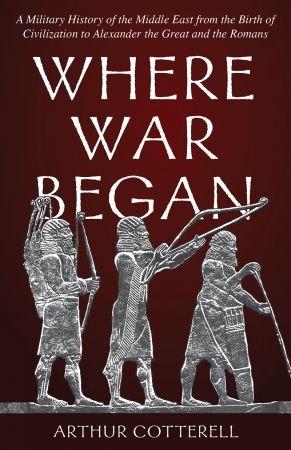