Good Arguments: What the Art of Debating can Teach us About Listening Better and Disagreeing Well

At a time when every disagreement turns toxic, world champion debater Bo Seo reveals the timeless secrets of effective communication and persuasion.

When Bo Seo was 8 years old, he and his family migrated from Korea to Australia. At the time, he did not speak English, and, unsurprisingly, struggled at school. But, then, in year five, something happened to change his life: he was introduced to debating.

Immediately, he was hooked. It turned out, perhaps counterintuitively, that debating was the perfect activity for someone shy and unsure of himself. It became a way for Bo not only to find his voice, but to excel socially and academically. He went on to win world titles with the Australian schools and Harvard University teams.

But debating isn’t just about winning or losing an argument: it’s about information gathering, truth finding, lucidity, organization, and persuasion. It’s about being able to engage with views you disagree with, without the argument turning toxic.

Good Arguments shares insights from the strategy, structure and history of debating to teach readers how they might better communicate with friends, family and colleagues. Touching on everything from the radical politics of Malcom X to Artificial Intelligence, Seo proves beyond a shadow of a doubt that, far from being a source of conflict, good-faith debate can enrich our daily lives. Indeed, these good arguments are more important than ever at time when bad faith is all around, and our democracy seems so imperiled.

‘From two-time world champion debater Bo Seo, a thoughtful, instructive and eloquent meditation on the art of debate and why its central pillars – fact-finding, reason, persuasion and listening to opponents – are so valuable in today’s alarming ecosystem of misinformation and extreme emotion. When Bo Seo’s family immigrated from South Korea to Australia, he was a shy, conflict-averse eight year old who worried about being an outsider, and in “Good Arguments,” he recounts how debate not only helped him to cross language lines, but also gave him confidence and a voice of his own.’ Michiko Kakutani, former chief book critic for The New York Times. 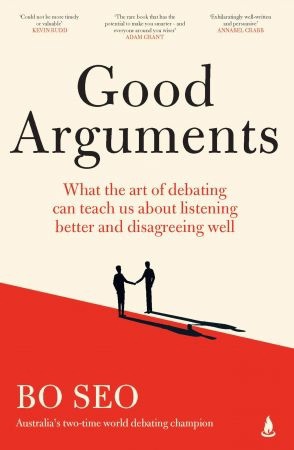