Republic of Numbers: Unexpected Stories of Mathematical Americans through History

This fascinating narrative history of math in America introduces readers to the diverse and vibrant people behind pivotal moments in the nation’s mathematical maturation.

Once upon a time in America, few knew or cared about math. In Republic of Numbers, David Lindsay Roberts tells the story of how all that changed, as America transformed into a powerhouse of mathematical thinkers. Covering more than 200 years of American history, Roberts recounts the life stories of twenty-three Americans integral to the evolution of mathematics in this country. Beginning with self-taught Salem mathematician Nathaniel Bowditch’s unexpected breakthroughs in ocean navigation and closing with the astounding work Nobel laureate John Nash did on game theory, this book is meant to be read cover to cover.

Revealing the marvelous ways in which America became mathematically sophisticated, the book introduces readers to Kelly Miller, the first black man to attend Johns Hopkins, who brilliantly melded mathematics and civil rights activism; Izaak Wirszup, a Polish immigrant who survived the Holocaust and proceeded to change the face of American mathematical education; Grace Hopper, the “Machine Whisperer,” who pioneered computer programming; and many other relatively unknown but vital figures. As he brings American history and culture to life, Roberts also explains key mathematical concepts, from the method of least squares, propositional logic, quaternions, and the mean-value theorem to differential equations, non-Euclidean geometry, group theory, statistical mechanics, and Fourier analysis. Republic of Numbers will appeal to anyone who is interested in learning how mathematics has intertwined with American history. 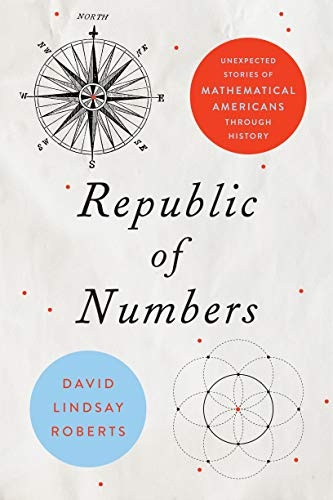