Explore the entire history of the ancient Egyptian state from 3000 B.C. to 400 A.D. with this authoritative volume

The newly revised Second Edition of A History of Ancient Egypt delivers an up-to-date survey of ancient Egypt’s history from its origins to the Roman Empire’s banning of hieroglyphics in the fourth century A.D. The book covers developments in all aspects of Egypt’s history and their historical sources, considering the social and economic life and the rich culture of ancient Egypt.

Freshly updated to take into account recent discoveries, the book makes the latest scholarship accessible to a wide audience, including introductory undergraduate students. A History of Ancient Egypt outlines major political and cultural events and places Egypt’s history within its regional context and detailing interactions with western Asia and Africa. Each period of history receives equal attention and a discussion of the problems scholars face in its study. The book offers a foundation for all students interested in Egyptian culture by providing coverage of topics like

A thorough introduction to the formation of the Egyptian state between the years of 3400 B.C. and 2686 B.C.An exploration of the end of the Old Kingdom and First Intermediate period, from 2345 B.C. to 2055 B.C.An analysis of the Second Intermediate Period and the Hyksos between 1700 B.C. and 1550 B.C.A discussion of Greek and Roman Egypt between 332 B.C. and A.D. 395.
Perfect for students of introductory courses in ancient Egyptian history and as background material for students of courses in Egyptian art, archaeology, and culture, A History of Ancient Egypt will also earn a place in the libraries of students taking surveys of the ancient world and those seeking a companion volume to A History of the Ancient Near East. 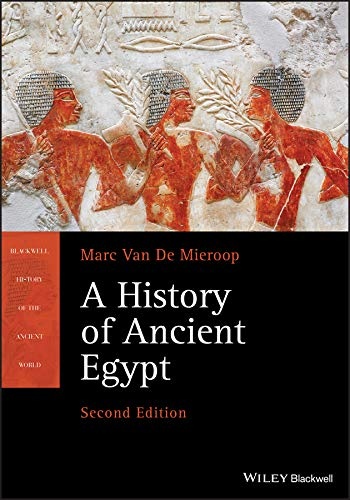