Bushido: The Samurai Code of Japan : With an Extensive Introduction and Notes by Alexander Bennett

Bushido: The Samurai Code of Japan is the most influential book ever written on the Japanese “Way of the Warrior.” A classic study of Japanese culture, the book outlines the moral code of the Samurai way of living and the virtues every Samurai warrior holds dear. It is widely read today in Japan and around the world.

There are seven core precepts of Bushido
Rectitude: “The power of deciding upon a certain course of conduct in accordance with reason, without wavering.”
Courage: “Doing what is right.”
Benevolence: “Love, magnanimity, affection for others, sympathy and pity.”
Civility: “Courtesy and urbanity of manners.”
Sincerity: “The end and the beginning of all things.”
Honor: “A vivid conscious of personal dignity and worth.”
Loyalty: “Homage and fealty to a superior.”
Together, these seven values create a system of beliefs unique to Japanese philosophy and culture that is widely followed today. Inazo Nitobe, one of Japan’s foremost scholars, thoroughly explores each of these values and explains how they differ from their Western counterparts. Until you understand the philosophy behind the ethics, you will never fully grasp what it meant to be a Samurai–what it meant to have Bushido. In Bushido, Nitobe points out similarities between Western and Japanese history and culture. He argues that “no matter how different any two cultures may appear to be on the surface, they are still created by human beings, and as such have deep similarities.” Nitobe believed that connecting Bushido with greater teachings could make an important contribution to all humanity–that the way of the Samurai is not something peculiarly Japanese, but of value to the entire human race.

With an extensive new introduction and notes by Alex Bennett, a respected scholar of Japanese history, culture and martial arts with a firsthand knowledge of the Japanese warrior code, Bushido: The Samurai Code of Japan is an essential guide to the essence of Japanese culture. Bennett’s views on this subject are revolutionizing our understanding of Bushido, as expressed in his Japanese bestseller The Bushido the Japanese Don’t Know About. 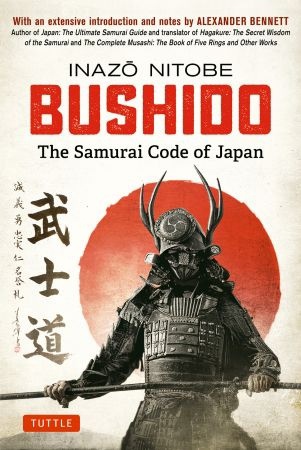