Why did India and China go to war in 1962? What propelled Jawaharlal Nehru’s ‘vision’ of China? Why is it necessary to understand the trans-Himalayan power play of India and China in the formative period of their nationhoods? The past shadows the present in this relationship and shapes current policy options, strongly influencing public debate in India to this day.

Nirupama Rao, a former Foreign Secretary of India, unknots this intensely complex saga of the early years of the India-China relationship. As a diplomat-practitioner, Rao’s telling is based not only on archival material from India, China, Britain and the United States, but also on a deep personal knowledge of China, where she served as India’s Ambassador. In addition, she brings a practitioner’s keen eye to the labyrinth of negotiations and official interactions that took place between the two countries from 1949 to 1962.

The Fractured Himalaya looks at the inflection points when the trajectory of diplomacy between these two nations could have course-corrected but did not. Importantly, it dwells on the strategic dilemma posed by Tibet in relations between India and China-a dilemma that is far from being resolved. The question of Tibet is closely interwoven into the fabric of this history. It also turns the searchlight on the key personalities involved-Jawaharlal Nehru, Mao Zedong, Zhou Enlai and the 14th Dalai Lama-and their interactions as the tournament of those years was played out, moving step by closer step to the conflict of 1962. 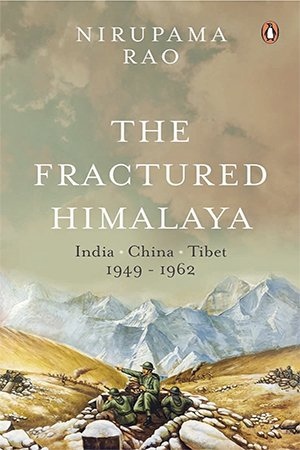