From early August until mid-November of 1942, US Marines, sailors, and pilots struggled for dominance against an implacable enemy: Japanese soldiers, inculcated with the bushido tradition of death before dishonor, avatars of bayonet combat–close-up, personal, and gruesome. The glittering prize was Henderson Airfield. Japanese planners knew that if they neutralized the airfield, the battle was won. So did the Marines who stubbornly defended it.

The outcome of the long slugfest remained in doubt under the pressure of repeated Japanese air, land, and sea operations. And losses were heavy. At sea, in a half-dozen fiery combats, the US Navy fought the Imperial Japanese Navy to a draw, but at a cost of more than 4,500 sailors. More American sailors died in these battles off Guadalcanal than in all previous US wars, and each side lost 24 warships. On land, more than 1,500 soldiers and Marines died, and the air war claimed more than 500 US planes. Japan’s losses on the island were equally devastating–starving Japanese soldiers called it “the island of death.”

But when the attritional struggle ended, American Marines, sailors, and airmen had halted the Japanese juggernaut that for five years had whirled through Asia and the Pacific. Guadalcanal was America’s first major ground victory against Japan and, most importantly, the Pacific War’s turning point.

Published on the 75th anniversary of the battle and utilizing vivid accounts written by the combatants at Guadalcanal, along with Marine Corps and Army archives and oral histories, Midnight in the Pacific is both a sweeping narrative and a compelling drama of individual Marines, soldiers, and sailors caught in the crosshairs of history.

2) The Ghost Mountain Boys: Their Epic March and the Terrifying Battle for New Guinea — The Forgotten War of the South Pacific – James Campbell
Broadway Books | 2008 | EPUB

A harrowing portrait of a largely forgotten campaign that pushed one battalion to the limits of human suffering.

Despite their lack of jungle training, the 32nd Division’s “Ghost Mountain Boys” were assigned the most grueling mission of the entire Pacific campaign in World War II: to march over the 10,000-foot Owen Stanley Mountains to protect the right flank of the Australian army during the battle for New Guinea. Reminiscent of the classics like Band of Brothers and The Things They Carried, The Ghost Mountain Boys is part war diary, part extreme-adventure tale, and—through letters, journals, and interviews—part biography of a group of men who fought to survive in an environment every bit as fierce as the enemy they faced. Theirs is one of the great untold stories of the war. 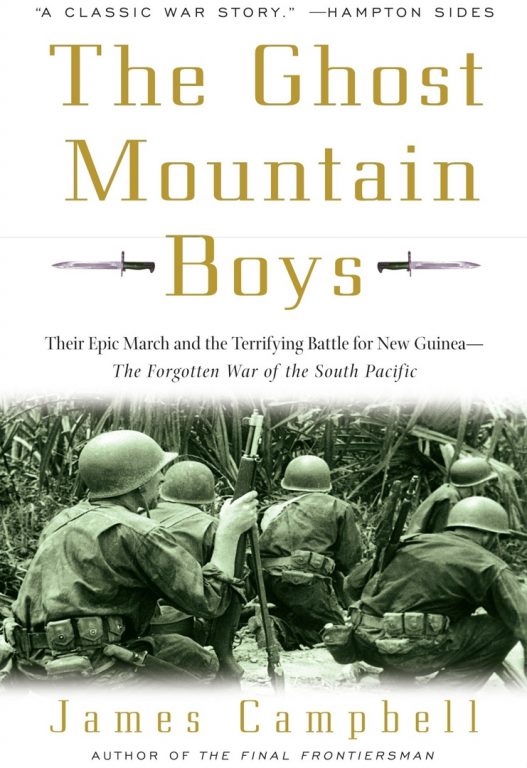