The Occupy movement and the protests that inspired it have focused new attention on the work of Mahatma Gandhi, who set out principles of nonviolent resistance during the struggle for Indian Independence, principles that found their echo in Tahrir Square, Puerta del Sol and Zuccotti Park some half a century later.

If there has been widespread recognition of Gandhi’s role in developing the tactics underpinning the revolutionary upsurges of the past year, few have stopped to examine what Gandhi actually said about the relationship between nonviolence, resistance and courage.

Step forward Norman Finkelstein, who, drawing on extensive readings of Gandhi’s copious oeuvre and intensive reflection on the way that progress might be made in the seemingly intractable impasse of the Middle East, here sets out in clear and concise language the basic principles of Gandhi’s approach.

There is much that will surprise in these pages: Gandhi was not a pacifist; he believed in the right of those being attacked to strike back and regarded inaction as a result of cowardice to be a greater sin than even the most ill-considered aggression. Gandhi’s calls for the sacrifice of lives in order to shame the oppressor into concessions can easily seem chilling and ruthless.

But Gandhi’s insistence that, in the end, peaceful resistance will always be less costly in human lives than armed opposition, and his understanding that the role of a protest movement is not primarily to persuade people of something new, but rather to get them to act on behalf of what they already accept as right – these principles have profound resonance in both the Israel-Palestine conflict and the wider movement for justice and democracy that began to sweep the world in 2011 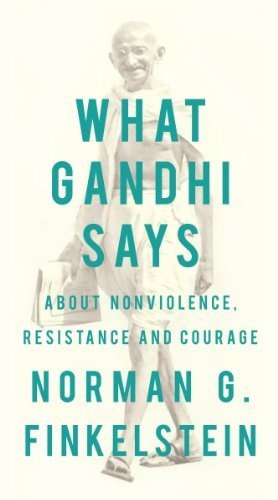