Made-Up: A True Story of Beauty Culture under Late Capitalism

A nuanced, feminist, and deeply personal take on beauty culture and YouTube consumerism, in the tradition of Maggie Nelson’s Bluets

As Daphné B obsessively watches YouTube makeup tutorials and haunts Sephora’s website, she’s increasingly troubled by the ways in which this obsession contradicts her anti-capitalist, intersectional feminist politics. In a looks-obsessed, selfie-covered present where influencers make the world go round, she brings us a breath of fresh air: an anti-capitalist look at a supremely capitalist industry, an intersectional feminist look at a practice many consider misogynist. Blending together the confessional, the poetic, and the essayistic, Made-Up is a lyric meditation on an industry in full bloom.

Made-Up explores the complicated world of makeup, from how it’s made to how we wear it, talking about gender, identity, capitalism, and pop culture in the process. Makeup doesn’t get a lot of serious attention; it’s often derided as shallow. But Daphné proves that it’s worth looking at a little more in-depth.

The original French-language edition was a cult hit in Quebec. Translated by Alex Manley—like Daphné, a Montreal poet and essayist—the book’s English-language text crackles with life, retaining the flair and verve of the original, and ensuring that a book on beauty is no less beautiful than its subject matter.

“The most radical book of 2020 talks about makeup. Radical in the intransigence with which Daphne B hunts down the parts of her imagination that capitalism has phagocytized. Radical also in its rejection of false binaries (the authentic and the fake, the futile and the essential) through the lens of which such a subject is generally considered. With the help of a heady combination of pop cultural criticism and autobiography, a poet scrutinizes her contradictions. They are also ours.” —Dominic Tardif, Le Devoir

“[Made-Up] is a delight. I read it in one go. And when, out of necessity, I had to put it down, it was with regret and with the feeling that I was giving up what could save me from a catastrophe.” —Laurence Fournier, Lettres Québécoises, five stars

“Made-Up is a radiant, shimmering blend of memoir and cultural criticism that uses beauty culture as an entry point to interrogating the ugly contradictions of late capitalism. In short, urgent chapters laced with humor and wide-ranging references, Daphné B. plumbs the depths of a rich topic that’s typically dismissed as shallow. I imagine her writing it in eye pencil, using makeup to tell the story of her life, as so many women do.” —Amy Berkowitz, author of Tender Points

“A companion through the thicket of late stage capitalism, a lucid and poetic mirror for anyone whose image exists on a screen.” —Rachel Kauder Nalebuff

“Made-Up is anything but—committed to the grit of our current realities, Daphné B directs her piercing eye on capitalism in an intimate portrayal of what it means to love, and how to paint ourselves in the process. Alex Manley has gifted English audiences with a nuanced translation of a critical feminist text, exploring love and make-up as a transformative social tool.” —Sruti Islam 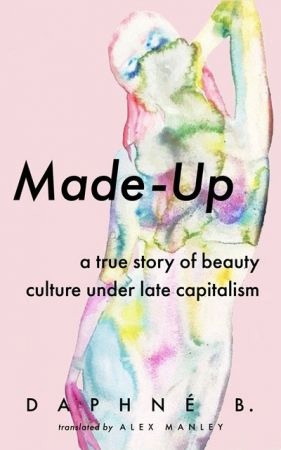