After virtue a study in moral theory by MacIntyre, Alasdair Chalmers

After Virtue: A Study in Moral Theory, Third Edition

MacIntyre’s book is a sustained critique of “the modern project.” The modern project came about in the 17th and 18th centuries. Thinkers tried to rework ethics and philosophy but in a new way: abandoning the Aristotelian and judeo-Christian ethic, they ended with a schizophrenic autonomy. Man is now seen as an autonomous agent who should further his autonomy but must live in the contradiction with other autonomous agents who also want to protect their autonomy. The modern project is a violent one at its core.

The strength of MacIntyre’s work is his sustained critique of modernity and the “natural rights” tradition. He reintroduces the concept of “narrative” as an ethical tool. I will highlight the main ideas:

The Ghost of “Human Rights”
Rights have a highly specific character and are resistant to the idea of universality. The language of rights talk differs from century to century and place to place, at each moment reflecting more the demands of th community rather than the story of humanity. And when rights are attempted to be universal in scope, they reflect, not the needs of humanity, but the agenda of the powered elite. Rights talk can be rehabilitated, but only in terms of local community’s narrative.

Deconstructing Aristotle
Contrary to his critics, MacIntyre is not arguing for a naive return to Aristotle. Rather, he points out the resilience of the Aristotelian tradition and then critiques its shortcomings. He uses Aristotle as a foil against Nietzsche. The importance of virtue at this point is not simply to demonstrate that Aristotle is the last word in ethics, but to show that it is impossible for consistent moderns to be virtuous. A virtue can only be understood in light of its telos (184). “The” good orders “our” goods. Modernity, accordingly, lacks such a telos–or rather has competing teloi.

Narratival Ethics
Man is a story-telling animal. We enter life with other characters and we have to learn what they are in order to understand how others respond to us (216). In ethics we learn the role we are to play. My narrative is inter-locking with the narratives of other members of the community. The telos, then, gives unity to this diversity of narratives. The telos allows me to see the whole of the narrative and the narrative gives clarity to the attempted moral vision (219).

Conclusion
MacIntyre’s work is dense and often hard to read. Most of the discussions of analytic philosophy were lost on me. While I thoroughly enjoyed his critique of natural rights, I think he spent too much time on it and then conclusion could have been clearer. The section on narratival ethics was outstanding. Contrary to the blurb on the back, his afterword really doesn’t deal with the integration of Aristotle and biblical theology.

This work deserves its pride of place as one of the most important philosophical works of the 20th century. 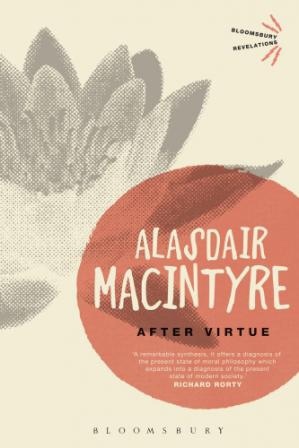 After virtue a study in moral theory by MacIntyre, Alasdair Chalmers.epub
1.21 MB