The Soul of Genius – Jeffrey Orens

The Soul of Genius: Marie Curie, Albert Einstein, and the Meeting that Changed the Course of Science

A prismatic look at the meeting of Marie Curie and Albert Einstein and the impact these two pillars of science had on the world of physics, which was in turmoil.

In 1911, some of the greatest minds in science convened at the First Solvay Conference in Physics, a meeting like no other. Almost half of the attendees had won or would go on to win the Nobel Prize. Over the course of those few days, these minds began to realize that classical physics was about to give way to quantum theory, a seismic shift in our history and how we understand not just our world, but the universe.

At the center of this meeting were Marie Curie and a young Albert Einstein. In the years preceding, Curie had faced the death of her husband and soul mate, Pierre. She was on the cusp of being awarded her second Nobel Prize, but scandal erupted all around her when the French press revealed that she was having an affair with a fellow scientist, Paul Langevin.

The subject of vicious misogynist and xenophobic attacks in the French press, Curie found herself in a storm that threatened her scientific legacy.

Albert Einstein proved an supporter in her travails. They had an instant connection at Solvay. He was young and already showing flourishes of his enormous genius. Curie had been responsible for one of the greatest discoveries in modern science (radioactivity) but still faced resistance and scorn. Einstein recognized this grave injustice, and their mutual admiration and respect, borne out of this, their first meeting, would go on to serve them in their paths forward to making history.

Curie and Einstein come alive as the complex people they were in the pages of The Soul of Genius. Utilizing never before seen correspondance and notes, Jeffrey Orens reveals the human side of these brilliant scientists, one who pushed boundaries and demanded equality in a man’s world, and the other, who was destined to become synonymous with genius, no matter the cost. 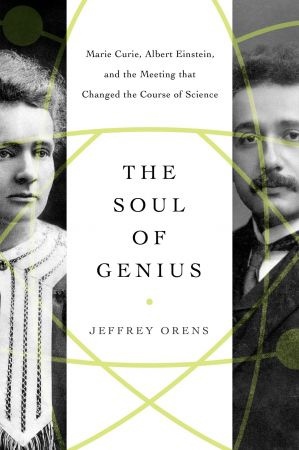