Brexit Unfolded: How no one got what they wanted (and why they were never going to)

“Brexit Unfolded is a must-read for anyone who cares about what happened following the momentous decision Britain took in the 2016 referendum. Grey is not a neutral observer, but his analysis is scholarly and balanced. He writes with engaging clarity as he navigates through toxic headlines and political slogans. It will be a long time before this illuminating account is rivalled.” Jonathan Dimbleby, broadcaster and author

This book tells the story of how Brexit unfolded following the 2016 referendum vote to leave the EU. As we lived through the confusing and occasionally dramatic swirl of events, it was often hard to make sense of what was happening. Now we can look back and take stock.

The meaning of Brexit wasn’t agreed by the referendum and in consequence was defined through the unfolding process of doing it. As that happened, many of the false claims made for Brexit foundered on the realities of international trade and international relations. Brexit was successful as a campaign movement but was exposed when it had to be turned into practical policy.

So any actual Brexit that might be delivered was inevitably open to the accusation of not being ‘true Brexit’. This set the stage for a sulphurous political culture which talked of sabotage, betrayal, enemies of the people, traitors and victims.

The legacy is a deeply divided nation in which many remain unreconciled to Brexit in any form whilst, in a tragic irony, some of those most committed to it are angry and dissatisfied with what it has meant in practice. This book explains how and why that happened. 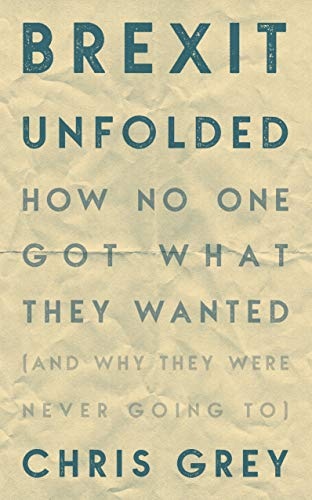