Introduction to Greek Mythology for Kids

Introduction to Greek Mythology for Kids: A Fun Collection of the Best Heroes, Monsters, and Gods in Greek Myth

Discover the exciting and fascinating world of Greek and Roman gods, goddesses, monsters, and heroes, from Zeus and Athena to Hercules, Medusa, and more!

Take a journey through Mount Olympus, Ancient Greece, and Ancient Rome with this collection of the greatest tales found in Greek and Roman mythology. From origin stories to family drama, you’ll learn about the most powerful Olympic gods including Zeus, Hera, Poseidon, Athena, Apollo, Artemis, Aphrodite, Hades, and more. But this book has more than just gods and goddesses! You’ll also discover the dangerous and intriguing world of ancient monsters, fantastical creatures, and mortal heroes that populate some of the most awesome stories from the time, including:

Atlas, who carries the weight of the world on his shoulders
Kronos, a Titan who swallows his newborn children
Persephone, a kidnapped goddess who becomes queen of the Underworld
Minotaur, a half-bull, half-man imprisoned in a labyrinth
Hydra, a poisonous serpent who grows two heads when one is severed
Sirens, sea nymphs whose irresistible singing lures sailors to their doom

All of these tales and more are written in a fun, kid-friendly manner, perfect for children interested in history or for fans of the Percy Jackson series. 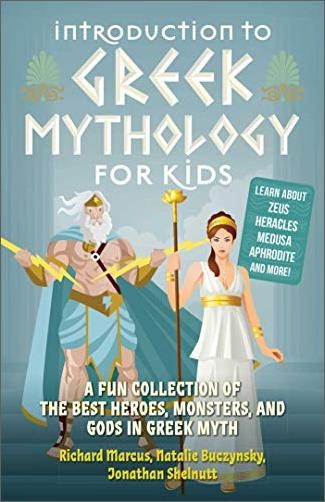