Silicon Values: The Future of Free Speech Under Surveillance Capitalism

What is the impact of surveillance capitalism on our right to free speech? The Internet once promised to be a place of extraordinary freedom beyond the control of money or politics, but today corporations and platforms exercise more control over our ability to access information and share knowledge to a greater extent than any state. From the online calls to arms in the thick of the Arab Spring to the contemporary front line of misinformation, Jillian York charts the war over our digital rights. She looks at both how the big corporations have become unaccountable censors, and the devastating impact it has had on those who have been censored.

In Silicon Values, leading campaigner Jillian York, looks at how our rights have become increasingly undermined by the major corporations desire to harvest our personal data and turn it into profit. She also looks at how governments have used the same technology to monitor citizens and threatened our ability to communicate. As a result our daily lives, and private thoughts, are being policed in an unprecedented manner. Who decides the difference between political debate and hate speech? How does this impact on our identity, our ability to create communities and to protest? Who regulates the censors? In response to this threat to our democracy, York proposes a user-powered movement against the platforms that demands change and a new form of ownership over our own data. 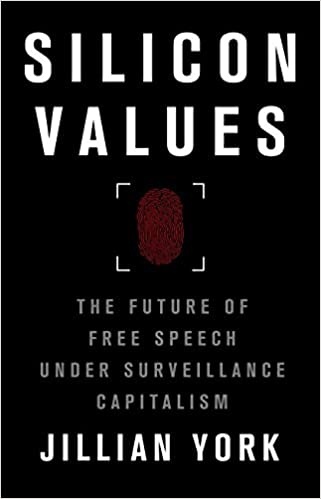