Conflict in the Holy Land

Conflict in the Holy Land : From Ancient Times to the Arab-Israeli Conflicts

With more than 250 cross-referenced entries covering every aspect of conflict in the Holy Land, this illuminating book will help students understand the volatile history of Palestine and Israel and its impact on the rest of the world.

Palestine is considered a sacred land by Christians, Jews, and Muslims. This has contributed to the violence that has ravaged the Holy Land throughout its long history. This A–Z reference work, which defines the Holy Land as historic Palestine (the combined territories of Israel, the West Bank, and the Gaza Strip), covers such ancient conflicts as Egypt’s rule over Canaan, the reign of King David, and the Jewish Revolts against the Roman Empire. In addition, the title includes detailed entries on such medieval conflicts as the Crusades and such contemporary conflicts as the Arab-Israeli wars.

The reference begins with an introduction that provides readers with the necessary context to understand the region’s bloody history and a comprehensive chronology that will help students construct a more complete picture of conflict in the Holy Land. Then come hundreds of key entries on the events, individuals, groups, places, and ideologies that have played an important role in the strife there. The title concludes with an expansive bibliography that will aid students looking to do more research on the topic and a thorough index. 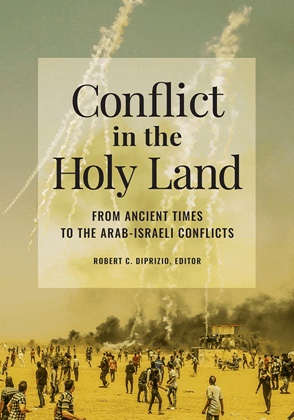