Shantaram
Gregory David Roberts
Amazon.com Review Crime and punishment, passion and loyalty, betrayal and redemption are only a few of the ingredients in *Shantaram*, a massive, over-the-top, mostly autobiographical novel. Shantaram is the name given Mr. Lindsay, or Linbaba, the larger-than-life hero. It means “man of God’s peace,” which is what the Indian people know of Lin. What they do not know is that prior to his arrival in Bombay he escaped from an Australian prison where he had begun serving a 19-year sentence. He served two years and leaped over the wall. He was imprisoned for a string of armed robberies peformed to support his heroin addiction, which started when his marriage fell apart and he lost custody of his daughter. All of that is enough for several lifetimes, but for Greg Roberts, that’s only the beginning. He arrives in Bombay with little money, an assumed name, false papers, an untellable past, and no plans for the future. Fortunately, he meets Prabaker right away, a sweet, smiling man who is a street guide. He takes to Lin immediately, eventually introducing him to his home village, where they end up living for six months. When they return to Bombay, they take up residence in a sprawling illegal slum of 25,000 people and Linbaba becomes the resident “doctor.” With a prison knowledge of first aid and whatever medicines he can cadge from doing trades with the local Mafia, he sets up a practice and is regarded as heaven-sent by these poor people who have nothing but illness, rat bites, dysentery, and anemia. He also meets Karla, an enigmatic Swiss-American woman, with whom he falls in love. Theirs is a complicated relationship, and Karla’s connections are murky from the outset. Roberts is not reluctant to wax poetic; in fact, some of his prose is downright embarrassing. Throughought the novel, however, all 944 pages of it, every single sentence rings true. He is a tough guy with a tender heart, one capable of what is judged criminal behavior, but a basically decent, intelligent man who would never intentionally hurt anyone, especially anyone he knew. He is a magnet for trouble, a soldier of fortune, a picaresque hero: the rascal who lives by his wits in a corrupt society. His story is irresistible. Stay tuned for the prequel and the sequel. *–Valerie Ryan* From Publishers Weekly At the start of this massive, thrillingly undomesticated potboiler, a young Australian man bearing a false New Zealand passport that gives his name as “Lindsay” flies to Bombay some time in the early ’80s. On his first day there, Lindsay meets the two people who will largely influence his fate in the city. One is a young tour guide, Prabaker, whose gifts include a large smile and an unstoppably joyful heart. Through Prabaker, Lindsay learns Marathi (a language not often spoken by gora, or foreigners), gets to know village India and settles, for a time, in a vast shantytown, operating an illicit free clinic. The second person he meets is Karla, a beautiful Swiss-American woman with sea-green eyes and a circle of expatriate friends. Lin’s love for Karla—and her mysterious inability to love in return—gives the book its central tension. “Linbaba’s” life in the slum abruptly ends when he is arrested without charge and thrown into the hell of Arthur Road Prison. Upon his release, he moves from the slum and begins laundering money and forging passports for one of the heads of the Bombay mafia, guru/sage Abdel Khader Khan. Eventually, he follows Khader as an improbable guerrilla in the war against the Russians in Afghanistan. There he learns about Karla’s connection to Khader and discovers who set him up for arrest. Roberts, who wrote the first drafts of the novel in prison, has poured everything he knows into this book and it shows. It has a heartfelt, cinemascope feel. If there are occasional passages that would make the very angels of purple prose weep, there are also images, plots, characters, philosophical dialogues and mysteries that more than compensate for the novel’s flaws. A sensational read, it might well reproduce its bestselling success in Australia here 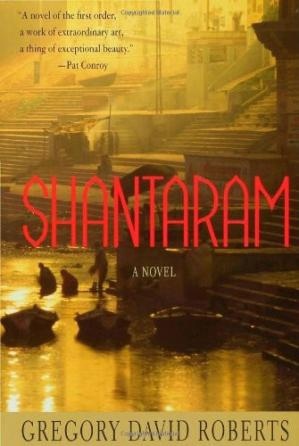