Thought Economics: Conversations with the Remarkable People Shaping Our Century

Since 2007, entrepreneur and philanthropist Vikas Shah MBE has been on a mission to interview the people shaping our century. Including conversations with world leaders, Nobel prizewinners, business leaders, artists, and Olympians, he quizzes the minds that matter on the big questions that concern us all.

We often talk of war and conflict, the economy, culture, technology, and revolutions as if they are something other than us. But all these things are a product of us—people like you, who have ideas that matter. We live in fast-moving and extraordinary times, and the changes we’re experiencing now, in these first decades of the twenty-first century, feel particularly poignant as decisions are made that will inform our existence for decades to come.

Vikas Shah is not a journalist. But he is curious and persistent—two things that have driven his business success, but have also been instrumental in getting him access to some of the most extraordinary people on the planet. In Thought Economics, Vikas presents some of his most emotive and insightful interviews to date. 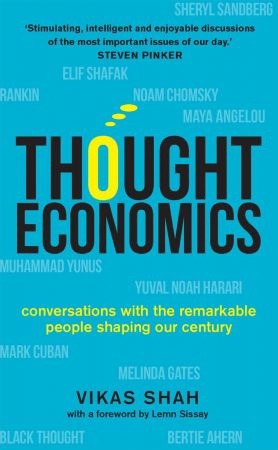