Coming out Swiss: In Search of Heidi, Chocolate, and My Other Life

Anne Herrmann, a dual citizen born in New York to Swiss parents, offers in Coming Out Swiss a witty, profound, and ultimately universal exploration of identity and community. “Swissness”—even on its native soil a loose confederacy, divided by multiple languages, nationalities, religion, and alpen geography—becomes in the diaspora both nowhere (except in the minds of immigrants and their children) and everywhere, reflected in pervasive clichés.

In a work that is part memoir, part history and travelogue, Herrmann explores all our Swiss clichés (chocolate, secret bank accounts, Heidi, Nazi gold, neutrality, mountains, Swiss Family Robinson) and also scrutinizes topics that may surprise (the “invention” of the Alps, the English Colony in Davos, Switzerland’s role during World War II, women students at the University of Zurich in the 1870s). She ponders, as well, marks of Swissness that have lost their identity in the diaspora (Sutter Home, Helvetica, Dadaism) and the enduring Swiss American community of New Glarus, Wisconsin. Coming Out Swiss will appeal not just to the Swiss diaspora but also to those drawn to multi-genre writing that blurs boundaries between the personal and the historical. 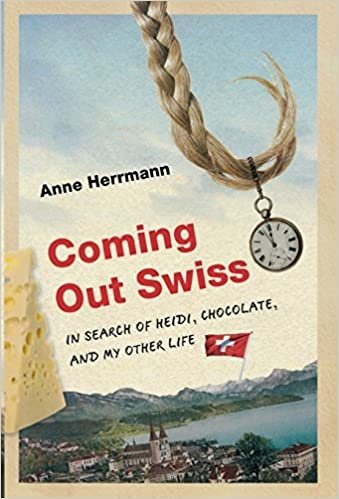