Sweets & Desserts from the Middle East

Sweets & Desserts from the Middle East

All Arto der Haroutunian’s twelve cookbooks written in the 1980s became classics; it was his belief that the rich culinary tradition of the Middle East is the main source of many of our Western cuisines and his books were intended as an introduction to that tradition. His Sweets & Desserts of the Middle East is regarded as the seminal work on the subject but it had been out of print for almost thirty years. At last here in a new edition is the Middle Eastern cookbook that everyone wants. In this book he takes us on a sumptuous and erudite tour of one of the delights of Middle Eastern cuisine. Sweets and desserts occupy a special place in those lands where natural food resources can sometimes be limited. The people have made supreme the art of creating delights from very little and in doing do have enriched their world with wafer-thin pastries, luscious halvas, crunchy biscuits, exotic fruits and cool refreshing sorbets. Many Middle Eastern desserts are very sweet (literally soaked in honey or syrup) and yet their variety is infinite. It reflects the multifarious origins and races of the people of the region and combines ancient traditions and modern influences. One basic sweet may have been adapted in a dozen different ways. Tantalizingly fragrant, sweet and succulent or dry and spiced with the aroma of the East they transport us as if by magic carpet to the exotic lands of the orient. There are recipes for sesame and date baklavas, almond and pistachio coated biscuits, tempting stuffed fruits, rich mousses, delicate sorbets and syrups, jams and preserves, all of which may tempt you to conjure up these Middle Eastern delicacies in your own home. 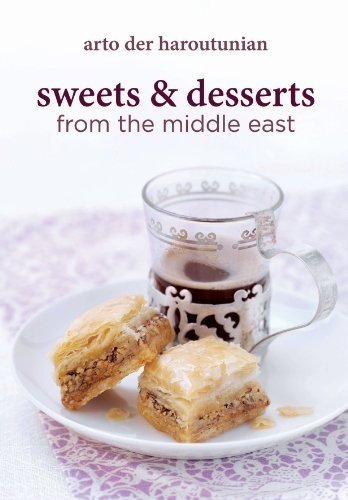