East Asia at the Center Four Thousand Years of Engagement with the World – Warren I. Cohen

East Asia at the Center: Four Thousand Years of Engagement with the World – Warren I. Cohen
Columbia University Press | 2000 | PDF

A common misconception holds that Marco Polo ”opened up” a closed and recalcitrant ”Orient” to the West. However, this sweeping history covering 4,000 years of international relations from the perspective of China, Japan, Korea, and Southeast Asia shows that the region’s extensive involvement in world affairs began thousands of years ago.

In a time when the writing of history is increasingly specialized, Warren I. Cohen has made a bold move against the grain. In broad but revealing brushstrokes, he paints a huge canvas of East Asia’s place in world affairs throughout four millennia. Just as Cohen thinks broadly across time, so too, he defines the boundaries of East Asia liberally, looking beyond China, Japan, and Korea to include Southeast Asia. In addition, Cohen stretches the scope of international relations beyond its usual limitations to consider the vital role of cultural and economic exchanges.

Within this vast framework, Cohen explores the system of Chinese domination in the ancient world, the exchanges between East Asia and the Islamic world from the thirteenth to the seventeenth centuries, and the emergence of a European-defined international system in the eighteenth and nineteenth centuries. The book covers the new imperialism of the 1890s, the Manchurian crisis of the early 1930s, the ascendancy of Japan, the trials of World War II, the drama of the Cold War, and the fleeting ”Asian Century” from the mid-1970s to the mid-1990s.

East Asia at the Center is replete with often-overlooked or little-known facts, such as:
• A record of persistent Chinese imperialism in the region
• Tibet’s status as a major power from the 7th to the 9th centuries C.E., when it frequently invaded China and decimated Chinese armies
• Japan’s profound dependence on Korea for its early cultural development
• The enormous influence of Indian cuisine on that of China
• Egyptian and Ottoman military aid to their Muslim brethren in India and Sumatra against European powers
• Extensive Chinese sea voyages to Arabia and East Africa—long before such famous Westerners as Vasco da Gama and Christopher Columbus took to the seas

East Asia at the Center’s expansive historical view puts the trials and advances of the past four millennia into perspective, showing that East Asia has often been preeminent on the world stage—and conjecturing that it might be so again in the not-so-distant future. 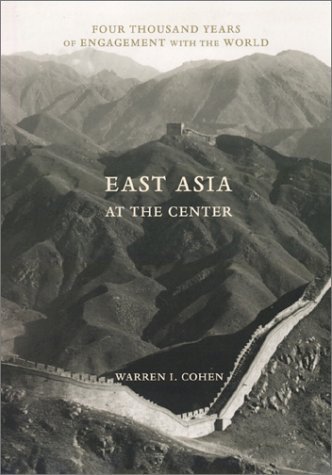 East Asia at the Center_ Four Thousand Years of Engagement with the World - Warren I. Cohen.pdf
3.47 MB