The World Beneath Their Feet: Mountaineering, Madness, and the Deadly Race to Summit the Himalayas

The World Beneath Their Feet: Mountaineering, Madness, and the Deadly Race to Summit the Himalayas

A saga of survival, technological innovation, and breathtaking human physical achievement — all set against the backdrop of a world headed toward war — that became one of the most compelling international dramas of the 20th century.

While tension steadily rose between European powers in the 1930s, a different kind of battle was raging across the Himalayas. Contingents from Great Britain, Nazi Germany, and the United States had set up rival camps at the base of the mountains, all hoping to become recognized as the fastest, strongest, and bravest climbers in the world.

Carried on across nearly the entire sweep of the Himalayas, this contest involved not only the greatest mountain climbers of the era, but statesmen and millionaires, world-class athletes and bona fide eccentrics, scientists and generals, obscure villagers and national heroes. Centered in the 1930s, with one brief, shining postwar coda, the contest was a struggle between hidebound traditionalists and unknown innovators, one that featured new techniques and equipment, unbelievable courage and physical achievement, and unparalleled valor. And death. One Himalayan peak alone, Nanga Parbat in Kashmir, claimed twenty-five lives in less than three years.

Climbing the Himalayas was the Greatest Generation’s moonshot — one shrouded in the onset of war, interrupted by it, and then fully accomplished. A gritty, fascinating history sure to enrapture fans of Hampton Sides, Jon Krakauer, and Laura Hillenbrand, The World Beneath Their Feet brings this forgotten story back to life. 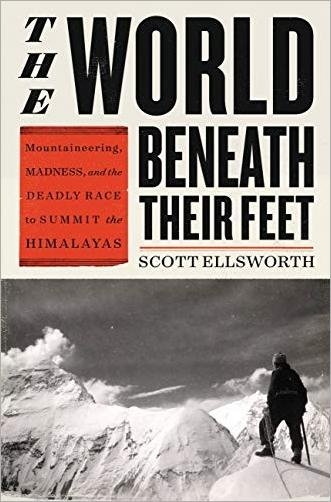