Revolution and Rebellion in the Early Modern World

What can the great crises of the past teach us about contemporary revolutions? Jack Goldstone shows the important role of population changes, youth bulges, urbanization, elite divisions, and fiscal crises in creating major political crises. Goldstone shows how state breakdowns in both western monarchies and Asian empires followed the same patterns, triggered when inflexible political, economic, and social institutions were overwhelmed by cumulative changes in population structure that collided with popular aspirations and state-elite relations. Examining the great revolutions of Europe―the English and French Revolutions―and the great rebellions of Asia, which shattered dynasties in Ottoman Turkey, China, and Japan, he shows how long cycles of revolutionary crises and stability similarly shaped politics in Europe and Asia, but led to different outcomes.

In this 25th anniversary edition, Goldstone reflects on the history of revolutions in the last twenty-five years, from the Philippines and other color revolutions to the Arab Uprisings and the rise of the Islamic State. In a new introduction, he re-examines his pioneering look at the role of population changes ― such as rising youth cohorts, urbanization, shifting elite mobility — as continuing causal factors of revolutions and rebellions. The new concluding chapter updates his major theory and looks to the future of revolutions in the Middle East, Asia, and Africa. 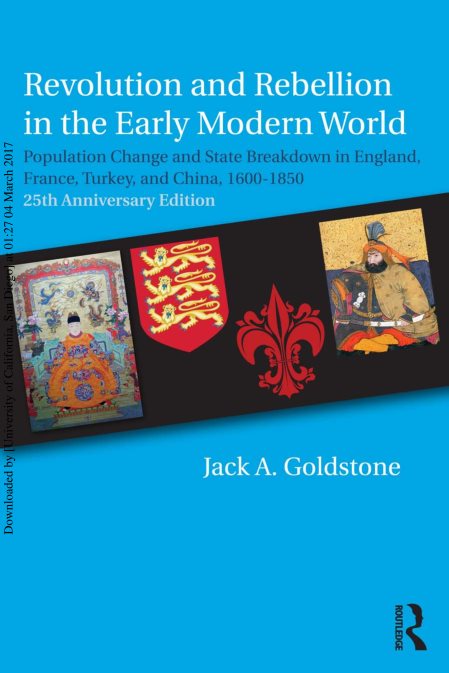 Revolution and Rebellion in the Early Modern World.pdf
24.36 MB