Life and Death in a German Town. Osnabrück from the Weimar Republic to World War II and Beyond

Life and Death in a German Town: Osnabruck from the Weimar Republic to World War II and Beyond – Panikos Panayi
I.B. Tauris | 2007 | PDF

The period between 1929 and 1949 represents one of the most traumatic and destructive in the history of Germany. Economic crisis, Nazism, war, destruction and post-war dislocation dominated the lives of all Germans and those living in Germany. While all ethnic groups faced great hardship during these years, there were stark differences between the experience of native ethnic Germans, German refugees from Eastern Europe, German Jews, Romanies and foreigners. Using vital primary sources, archival material and insightful interviews, Panikos Panayi presents an extraordinary analysis of the individual experiences of, and relationships between, all these groups living in the German town of Osnabrück. He focuses on Alltagsgeschichte (the history of everyday life) to understand the realities for people living in one German location in a time of great change and upheaval. By concentrating on the wide span of 20 years of German experience he brings original breadth to an area of study, more commonly associated with the narrower focus of 1933-45.

Despite the centrality of race in Nazi ideology, this is the first major study to look at the lives of all of the differing ethnic groups in Germany during this period. Panayi reveals the fluidity of the borderline between victims and perpetrators, how the use of forced labour dramatically changed the ethnic composition of the town and the impact of the arrival of German refugees from Eastern Europe at the end of World War II. Panayi’s revealing analysis of the continuity and discontinuity in the everyday lives of Osnabrückers between 1929 and 1949, and the inter-ethnic relations during this period, is an essential reference tool for anyone wanting to understand the now time realities of living in Nazi Germany. 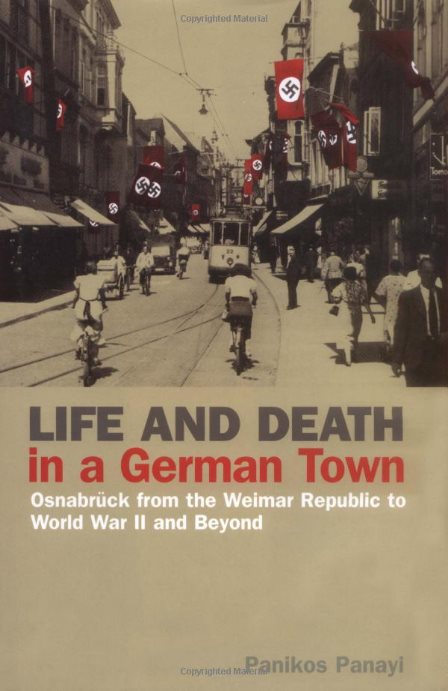 Life and Death in a German Town. Osnabrück from the Weimar Republic to World War II and Beyond.pdf
4.52 MB
More magazines
on the
MAGAZINELIB.COM