Japanese for Beginners is a straightforward learning guide which enables beginners to pick up a function knowledge of spoken Japanese very quickly and easily.

Specifically designed to teach spoken Japanese as it is used in daily life rather than in a formal setting, Japanese for Beginners is perfect for a tourist or business person traveling to Japan or a student who wants to learn Japanese rapidly and effectively. Up-to-date and concise, it features the most well respected and proven approach available. Full lessons break down the more difficult aspects of the Japanese language such as pronunciation and grammar, while the downloadable audio allows for listening comprehension and practice. The writing element focuses on the easy-to-read Latin script (romanji) rather than on the more difficult Japanese script (kanji and kana), cutting down on the time it takes between starting the book and being able to speak Japanese.

Thousands of people need to communicate in Japanese for practical reasons, but don’t have the time or opportunity to devote the many years it takes to study Japanese formally. By providing a firm grounding in Japanese sentence structure, using dialogues that reflect authentic Japanese culture and comic strips that emphasize conversations and humor, Tuttle Japanese for Beginners will soon have you on your way to becoming conversational in Japanese. When you consider that the Japanese language is spoken by 125 million people worldwide, and Japan is the world’s third largest economy, the advantages of speaking Japanese become clear! 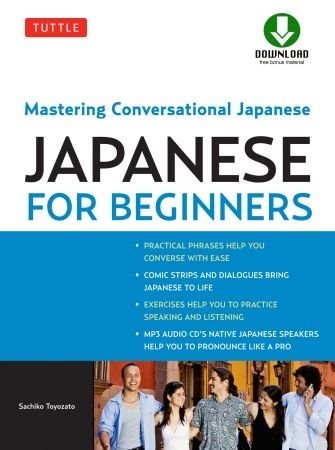